After completing the AI for Pickomino I wanted to play against it and watch it in action. So I decided to create a version of the game for our touch table. I wont be trying to sell this game since I don’t have the rights from the creator of the board game. So it will just be for our own use.

The game came together pretty quickly. I spent a day or so learning Photoshop and creating graphics. Another couple of days building the game logic and integrating the C++ AI. Another day adding “simultaneous” mode. And a final day to add animations and work out bugs. Here is a screenshot of the final product. 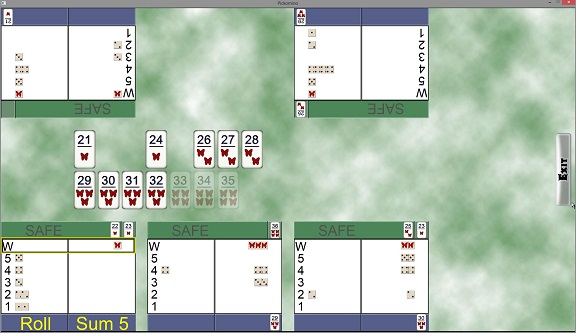 The board game supports 2-7 players, but my version allows 1-8 to play. In the screenshot above, there are five players in “simultaneous” mode. Four players are done and ready to take another tile while the player in the lower left is selecting a die to keep.

My main complaint with the physical game of Pickomino is that it can last too long as players swap tiles with each other. You also spend a lot of time watching other people roll. This is especially true in a game with a lot of players. As BoardGameGeek says, the game is really best with three or four players. “Simultaneous” mode is my attempt to fix these two problems.

Normally, each player takes a turn with the dice, rolling till they take a tile or scratch. In “Simultaneous” mode all the players roll dice at the same time. Once everyone has decided to stop and take a tile, or scratched, all the tiles are distributed at once. If multiple players earn/steal the same tile, they each get a copy of that tile. If a player steals a tile and multiple people are showing that tile, all the players showing the tile lose it and the stealing player gets a single copy. If a player scratches the tile is returned to the table if there isn’t another copy of that tile owned by a player, otherwise the tile is destroyed. The idea is to create copies as needed to make sure that everyone gets what they earned, but to destroy the extra copies whenever possible.

Now that I have had a chance to watch the AI, I’d say that the main difference between the AI and the humans I normally play against, is that the AI is more aggressive. The AI also does well at the end of the game when there are only a few tiles available. It can plan which dice to keep to maximize the odds that it will be able to take one of those specific numbers. That said, there is enough luck involved that I don’t feel overwhelmed by the AI.