We attended the Conclave of Gamers convention in Denver this past weekend. We brought our touch table and were joined by our friend Doug from TouchTableGames.com who brought his newly built touch table. We ran all the games on both tables and had a lot of fun. We got to play all of our games including Power Grid, Fire Platoon and several rounds of Hansa Teutonica.

While this convention was considerably smaller than PAX or GenCon, it was also a lot more relaxed and the attendees were willing to spend more time at our tables. We got to meet with a couple local game developers who may be interested in having Dark Infinity write a touch table version of their games. 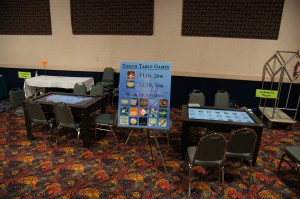 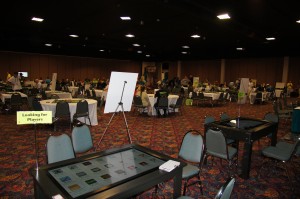 The convention was held at a hotel just a few miles from our house, so we were able to take both tables over in our car. Setup and tear down was very quick. Overall it was a great convention and we are looking forward to doing it again next year.