I’ve been playing “Shop Heroes” for about a month. It’s a bit embarrassing because it isn’t a serious computer game. In fact it’s a casual browser/mobile game and it even has micro-transactions where you can pay money to speed up progress in the game. It’s the reality TV or soap opera of the computer game world. But it has managed to distill the addictive elements of casual and role playing games into a very appealing form. 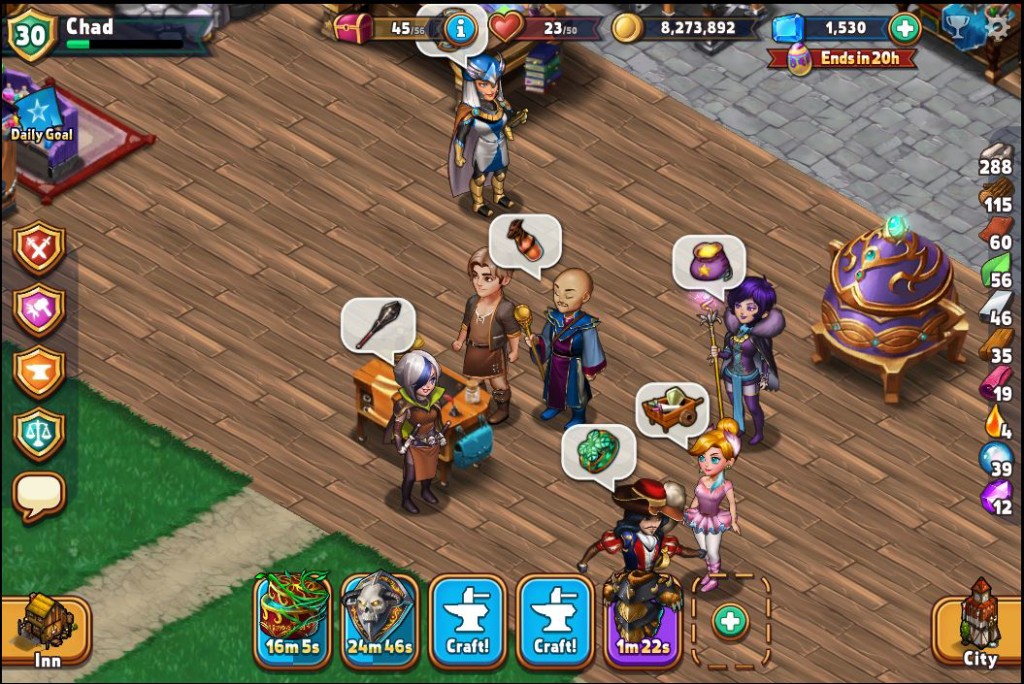 In the game, you run an item shop in a D&D style world. You craft items that you can sell or use to equip heroes. You are responsible for a whole stable of heroes with different equipment needs. You upgrade your shop and even other buildings in the city to allow you to craft better and more powerful items.

There are several things that I like about this game. Some are shared by the whole casual game category:

Shop Heroes in particular is fun because of the pacing of actions/rewards and the number of interlocking tasks. The game, especially in the early stages, is always giving you something to do. It starts with a tutorial to get you started, but you quickly start to create your own goals. Say you want to build a fancy sword. The fancy sword needs: a rare rock that can only be gathered by a hero from a quest, some resources generated by the city, and a simpler sword that you craft. So you send a hero off to get the rare rock, you go out to the city and turn on the resource generating buildings, and build the simple sword. When the hero comes back, you get the rare rock and start making the fancy sword. But maybe the hero leveled or broke some equipment, so you need to make them a new hat or boots and those require some other quest item etc.

I know it sounds like work, but the game rewards you for each step. The buildings in the town level up and work better. Making a certain quantity of each item unlocks upgrades to that item. Selling items gives you money and personal experience. Your character levels up unlocking shop and town upgrades. The heroes gain levels and skills which makes them able to do harder quests. You can upgrade your shop to have more space for equipment and the individual pieces of equipment within the shop to work better. The craftsmen in the shop level up to make the items faster.

Shop heroes get a lot of its addictive mechanics from MMORPGs. The pacing of rewards (fast at first but constantly getting slower as you improve) is identical. Shop Heroes also uses the idea of having lots of independent abilities that are improving with use. Another aspect that I really admire in a game and would like to be able to replicate, is that the complexity rises slowly as you play. At the beginning there is one type of resource, one build slot, one quest slot, one hero and a couple buildings in town. As the game progresses, everything is slowly unlocked. There are more resources and items require a mix. You can craft several things at once. You get more heroes who need different things. Building an item starts to require different shop equipment and craftsmen and other crafted items. This makes the game easy to learn while allowing a decent amount of complexity by the end. Buildings unlock other buildings which give you more heroes and workers. 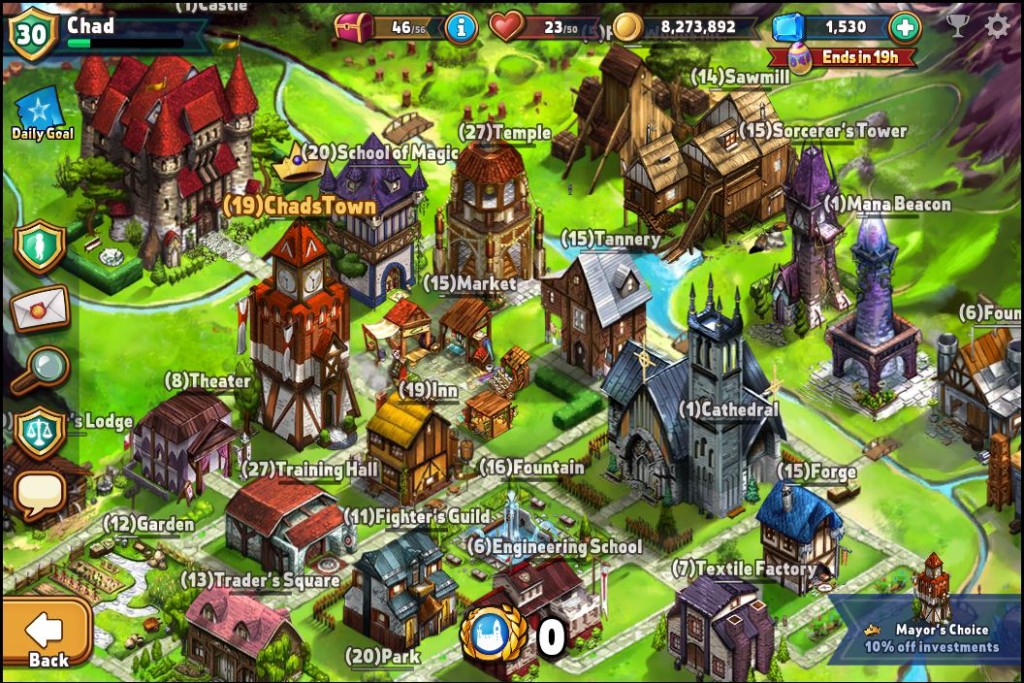 There are several mechanisms in the game to encourage you to log in at least daily: There is a weekly weekend quest. There is a daily quest that gives rewards of new equipment to build. There is a wheel you can spin every eight hours for a small bonus. And most everything you do in the game takes some amount of time, so it is most efficient if you come back often enough to keep all the task slots full. The game also rewards “streaks” of daily quests completed and spinning the wheel at least once a day.

Of course there are some compromises for playing a free online game. Almost everything in the game can be sped up by paying “gems”. The gems can be earned playing the game, but they can also be bought with real money.

The complexity of the game doesn’t match “serious” or AAA titles. There may be quite a few steps to accomplishing a task, but there are very few hard decisions to make and there is also very little risk of loss. A mistake is never very serious.

I am about two thirds of the way through the game. I have a lot of patience for grinding, but not nearly as much as the truly dedicated players, and these games are designed so that the hardcore fans are the only ones who can get to the end. And there are some very hardcore players of this “casual” game. There is a subreddit and a wiki dedicated to the game and after playing for a month I am still ranked 11,000th.

I gave up on Shop Heroes at the end of May. I played the game for three months and got a lot of entertainment from the game. I never bought any gems and didn’t feel like I was way behind the people who did. I stopped playing right as the PvP was staring up. Between the PvP and the weekly city quest the game was staring to feel like an obligation. It was also taking a really long time to make any progress, so maybe I just hit my grinding limit.

I still think about the game and its mechanics when I am writing my own games.