When I quit my job in 2011 I wrote a program to simulate retirement and give me a feel for the odds that we would be able to survive on the money we’d saved. The program used a Monte Carlo approach to simulate thousands of possible market scenarios and had logic for how we would spend money, collect social security, pay taxes, etc. At the time the program said that we had an 85% chance of outliving our money. That was good enough to quit; knowing that we could go back to work if we had to.

Since writing that program I’ve come back to it every few years to put in more recent data and make improvements. Once my spouse and I got married, I took out a bunch of code that split expenses and taxes between the two of us.

A few months ago I decided to give the program a full makeover and add features to make it useful to more people. The original program was very specific to our situation and didn’t handle account types, expenses, and investments that we didn’t have. Along with adding new features, I needed to make the program much more user friendly and error tolerant.

I’ve completed this project, and the program (and source) are available for download. It still doesn’t handle nearly as many situations as I’d like, and it has very little support for people who are still working, but it is good enough to release. 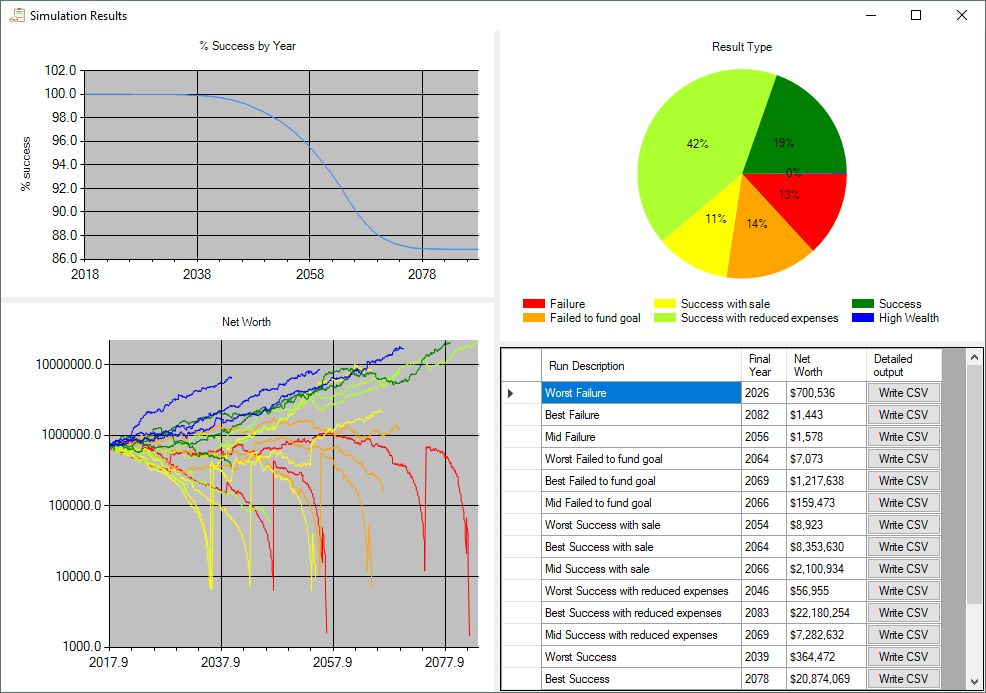 Our brokerage offered us access to their retirement planning product called “Money Guide Pro”. In some ways it is very similar to my program: it uses a Monte Carlo market simulation; it requires you to input assets, expenses, and retirement goals; and it presents the results as a probability of success. There are also some big differences: they handle a wide variety of situations that my program doesn’t; their program runs as a web app; and most importantly their program isn’t available unless you have a financial adviser working with you. I couldn’t find out how much companies like Money Guide Pro charge brokerages for access to the program, but it certainly isn’t free, and the inner workings are proprietary. While my broker was pretty low pressure, the broker’s goal is to use the program to sell management services or annuities.

The results from the professional software were very similar to my program which gave me a little more confidence in my approach. After looking around the web, I didn’t see any other products that were already doing what my program did, and I have the flexibility to release the software for free and make the source code public.

For this release I added a bunch of new features to the program:

The original program was written in a mix of managed and native C++ using Mircosoft’s C++/CLI platform. I’ve had issues over the years getting my code to build in the latest versions of Visual Studio, and I’m not thrilled with the level of support for C++/CLI from Microsoft (they are pushing Metro App development). But between the reuse codebase and the advantages of C++/CLI, I decided to stick with it. C++/CLI allows you to write either managed C++ that acts a lot like C# and gives you access to the .NET libraries, or native C++ where you manage your own memory, have access to STL and BOOST, and get the performance advantage of native C++. The drawback of this mix is that the managed C++ uses funky looking symbols (^ is roughly *, and % is roughly &, gcnew instead of new) and doesn’t have good lambda function support. It is also a big pain moving data back and forth from managed data structures to native data structures.

The GUI in my program is all built on the Windows.Forms part of the .NET library. So all the GUI is managed code. Since the GUI often directly manipulates the data model, the model that backs the GUI is mostly built on the .NET System.Data.DataSet class and is managed. But, I want the simulation to run fast, so that part is written in native C++. At the start of a run, the managed data model is copied into native C++ classes.

Along with the hassle of managed C++, this was also the first C++ project that I have worked on for several years and I’ve really grown accustomed to the conveniences of C# and the LINQ extensions. Writing constructors, copy constructors, destructors and member accessors is a lot of code overhead that I’d gotten used to not having to write.

I used the C++ library Boost for random number generation and the normal and student’s t distribution. I also used the .NET charting library for all the plots and graphs.

Another large task in this project was to write documentation for how to use the program and to describe how the simulation works.

At 111 hours, this update to SimRetirement has taken as long as a large touch table game. I don’t know how long I spent on the original program. Probably a similar amount of time. I spent a lot more time doing research for the first version of the program. Deciding how to model the stock market and other market variables took a long time.

The majority of the lines of code are for the GUI. Of those 75% are generated by the GUI builder.

This project also required a lot of data. I use historical data for several of the “Market” tab plots. I also include data that is used by the model for life expectancy and social security calculations. I store all this data as XML. There are 1490 lines of this kind of data.

Unlike a touch game, this project required basically no art assets. Besides the icon, I didn’t need any graphics. All the charts and graphics in the program are from the .NET Data.Charting library.

I’ve released the program and source code for download on my website. I’ll also post it to reddit in some of the personal finance subs. But I don’t expect to see much interest in the program. I think that it would be useful to people, but it is really difficult to find things like this program on the internet today.

While there’s a nearly unlimited market for phone and web apps, the market for desktop applications is really struggling. There isn’t nearly as much demand as there once was, and the process of discovering desktop software is broken.

We once relied on shareware aggregation websites where people looking for software could search both free and pay software. Sites like tucows and freewarefiles used to be the first stop when trying to find software. With the rise of Google, those sites have become an afterthought and many of them have turned into ad-burdened cesspits of low-quality and/or trial software. Today there isn’t something like the Play Store for desktop software, and searching for shareware/freeware on Google is frustrating (mostly due to shady SEOed sites selling software).