I’ve converted Vegas Showdown for the touch table. Vegas Showdown is a 3-5 player game where the players try to build the best casino by bidding for tiles. The touch table version plays a little bit faster since players don’t have to deal with the money. It also shows you more about the status of the player scores and available tiles. 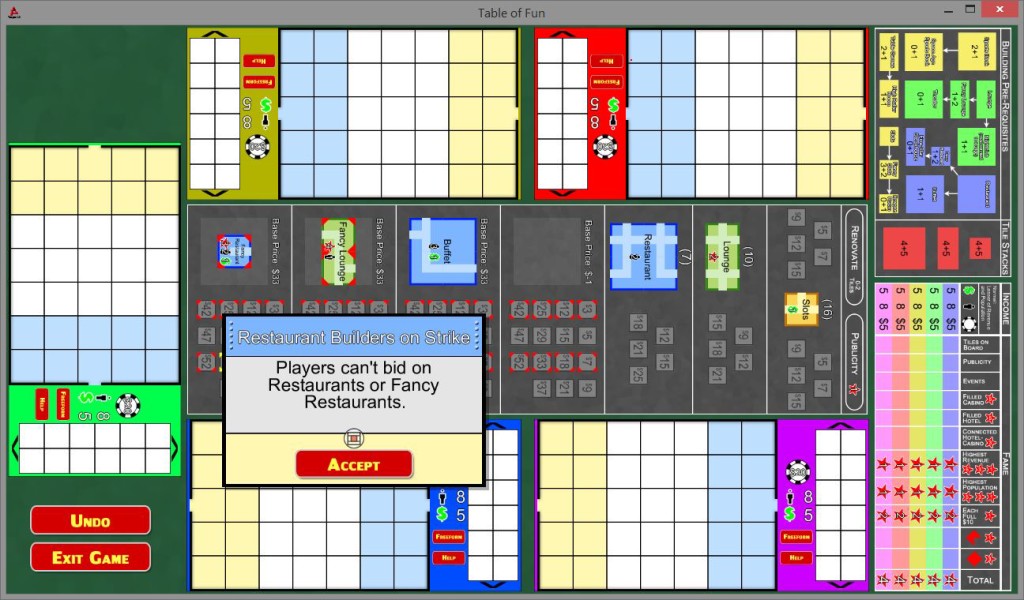 This game was a bit simpler than Puerto Rico and Le Havre and I was able to re-use a lot of code and conventions from those games. It still took about about 80 hours to complete. I’d guess that I spent more time making graphics in Photoshop than I did for the last two games, but I am happy with the look of the game. I wrote the game in torque script and ended up with 4200 “raw” lines of code. Here is a comparison of this project to some of our other games

I haven’t contacted the publisher to see if I can distribute this game. They had an online version of Vegas Showdown linked from the official page, but that link no longer works. Vegas Showdown is an older game that isn’t as well ranked as some of the other games that I have converted, but I still don’t have high hopes for getting permissions.

This is probably the last game that I will create with the Torque game engine since we are migrating to the Unity engine. It is going to take some time to learn Unity and to replace some of the capabilities that we have built up over time in the Torque engine. But I am looking forward to writing code in C# instead of torque script and using the Unity game builder.