Late last year I finished a real-time game for the touch table that I called “Muck”. It is an economic game for two to six players that plays in a half hour. The game is modeled off the board game Brass. I’ve considered converting Brass directly, but it only plays four people, it has hidden information and we really aren’t playing it much anymore. 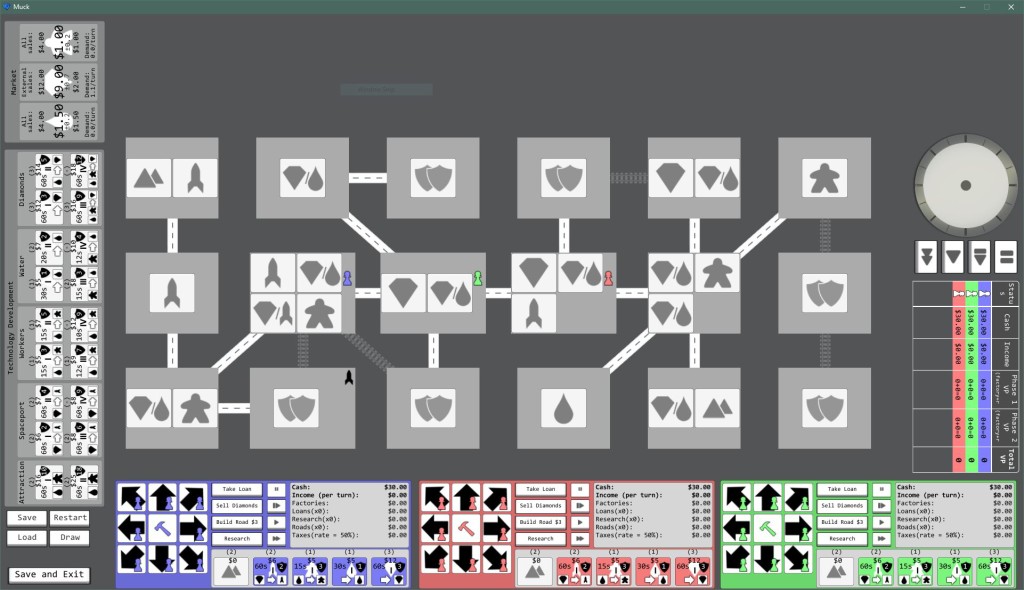 In Brass, players build factories and transportation links between them. Factories generate income, victory points and goods that are used by other factories. Almost all the mechanics in Brass translate nicely to a real-time game with a simulated economy. In the board game, a factory tile flips over and increases your per-turn income when all its goods are sold. The buyers are other factories or external markets. For the computer game, I translated all the factories’ costs and production into continuous rates. So when a player builds a factory, it starts consuming and producing goods and it continues for the rest of the game. The player gets income each time a good is produced and sold.

This is the first game that I have created where I had to come up with some of the rule instead of converting existing rules from a board game. Coming up with rules that are understandable and create interesting/fun situations for the players is an art and an area of expertise that is very different from creating software. I don’t have much practice creating games, so it took a long time to work out how Muck was going to behave. When I started the project, I had a lot of ideas for changes to Brass that I didn’t end up making. I did replace the cards with a moving “CEO” and I had to convert some of the one-time costs in Brass into continuous expenses. I also removed some of the more complicated connectivity rules.

One disadvantage of making up my own rules is a lingering feeling that game isn’t done. I feel like the rules could be tweaked to make it more fun. Straight conversion games are “done” when the rules are all implemented and I haven’t found a new bug for a couple plays. This post is coming out a month after I stopped working on the game because I expected to make more changes to the game.

This is the second real-time game that I’ve made for the touch table. Like Fire Platoon (and most games since), I used the timeline and event system. This game made more use of the ability to schedule events to happen in the future than even Fire Platoon. Most events in Muck execute and then add themselves back to the timeline to be executed again next “turn”. The game doesn’t have an undo, and since it only takes a half hour to play, it didn’t really need a save. But I went ahead and wrote the save code so that I could save/load a game during development. It certainly required more code to write it this way, but I’m pretty sure it was worth it in the time I saved debugging by being able to get right back to a buggy condition.

Fire Platoon was in Torque, so this was my first real-time Unity game. Like Torque, Unity has a global “Timescale” that determines how fast game time progresses. Changing that one variable changes how fast the animations run and how fast the timeline processes events. This allowed me to give the players pause/slow/play/fast-forward buttons to control the speed of the game.

Brass can play three or four players and I wanted Muck to play anything from one to six. I analyzed the board in Brass and converted everything to numbers per player. I then build random boards appropriate for the number of players in the game. I use the fair dice roller to keep the boards balanced and I also have some rules for what makes a valid board in terms of counts of certain factory types and the connections between cities.

I haven’t decided if I can release this game. I clearly used a lot of the mechanics and ideas from Brass. But the game play and feel are very different. I don’t think that anyone would play Muck as a substitute for Brass. Based on my non-expert understanding of copyright laws, I think that it would be legal for me to release the game.

The name “Muck” comes from the same industrial-era saying that the name “Brass” derives from. The saying is “Where there’s muck there is brass”. Brass was slang for money and the saying means that you can make money from dirty and/or hard work.