I’ve had my Yamaha YEV-105 five string electric violin for a month now. Here is my review and information about setting it up with a DigiTech RP360 effects processor and a home stereo or computer.

Disclaimers: I’m an adult beginner and amateur player. I’ve owned four violins: two acoustic and two electric. I’m not being paid for this review and haven’t been asked to write it.

Note: I wasn’t able to find an online manual while shopping for this violin, so I’ve scanned it in: Manual

I chose this violin because of its looks, my desire to have a quieter practice instrument and because the fifth string will let me learn and play viola music.

Getting used to a five string

I’ve been practicing on a muted four string acoustic for seven years. Transitioning from the four string to the five string took several days and I still occasionally have issues when playing on the G string. The spacing between the strings is very similar to a four string and so the neck is wider. The amount of bow travel needed to change strings is a little bit less than the four string and that caused most of my early difficulties. It is also a bit confusing when playing on the D string if I look down at my fingers expecting them to be on the second string. 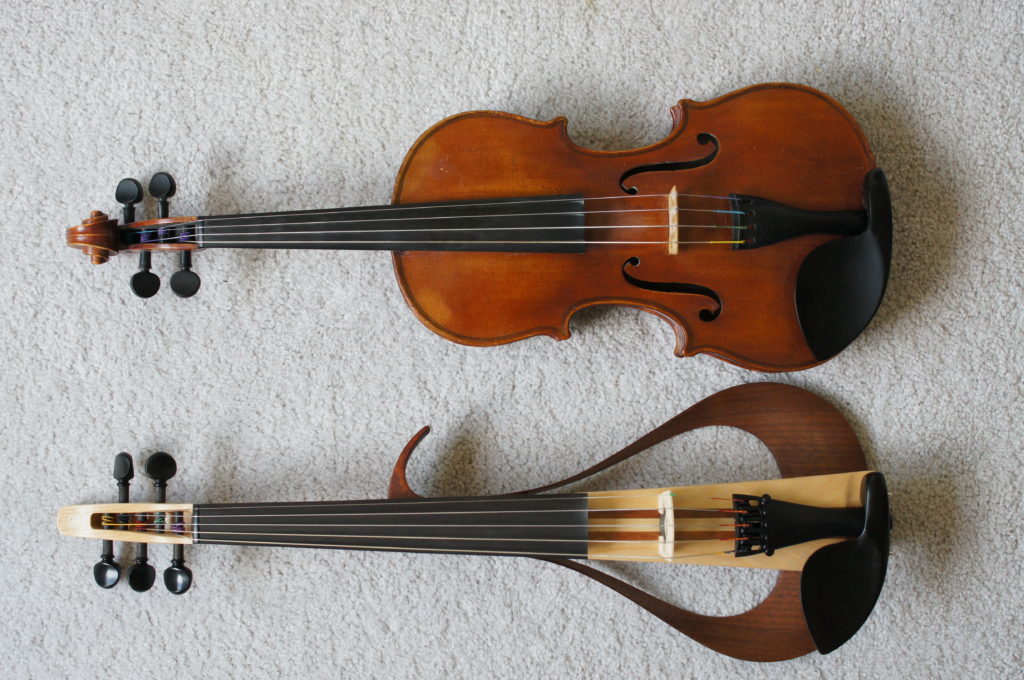 The instrument size is extremely close to my acoustic. I have two standard shoulder rests and they both fit the Yamaha. The bit of wood that simulates the part of the upper body is placed just right and feels just like an acoustic when shifting into third and higher positions. The Yamaha weighs a bit more than my acoustic: 580 g vs 500 g. (the four string YEV-104 weighs 550 g) 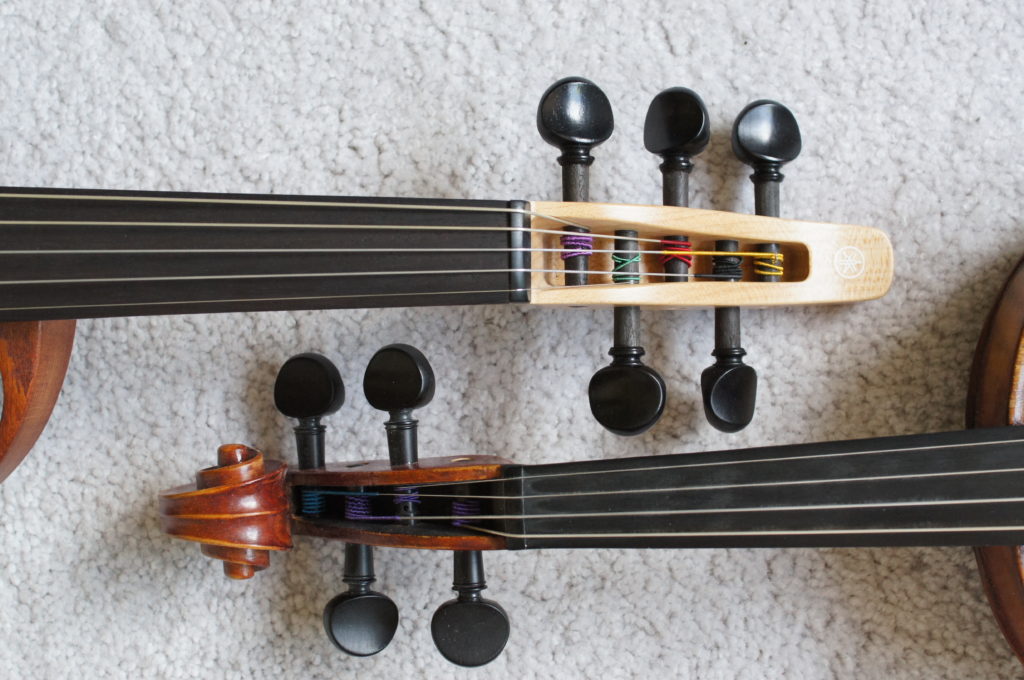 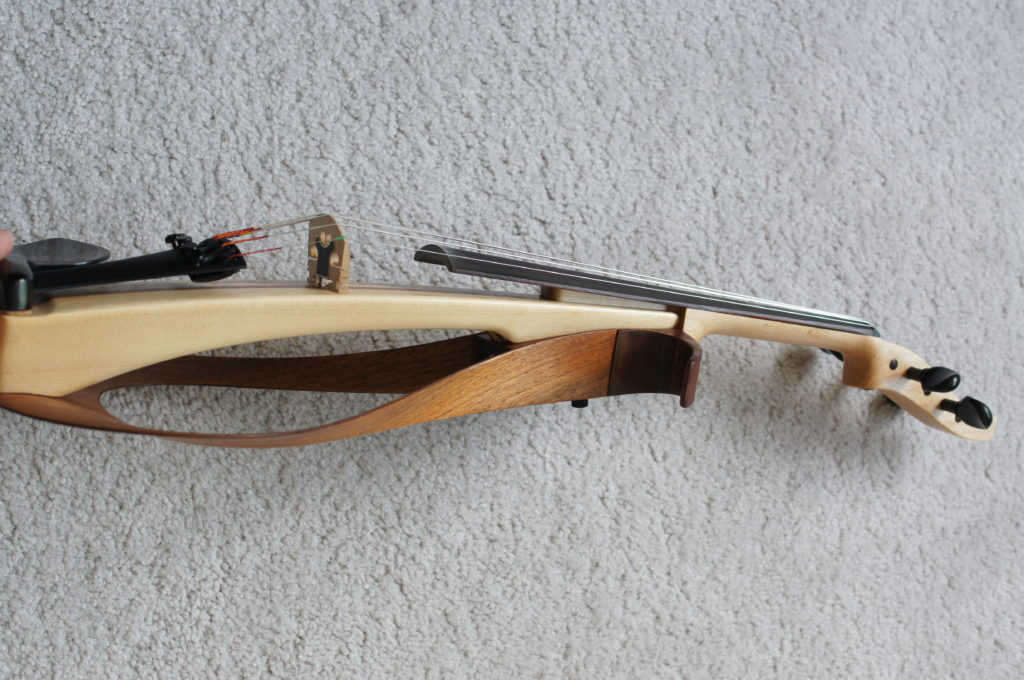 The Yamaha comes with D’Addario Zyex strings and they are just a bit tighter than the Dominants on my acoustic. But they are very comfortable compared to the steel strings on my other electric. The chin rest is standard and comfortable. The pegs turn and stick as they should and there are fine tuners on all the strings. The violin feels solid except for the thin darker wood that makes up the body shape. That wood feels fragile but holds up fine.

The Yamaha YEV is easy to play. There are no weird resonances or wolf tones, and playing in high positions still gives a full sound. The strings have a similar tone and volume to each other. Of course the E string is noticeably brighter than the A string, but that is expected. I’d also say that the A string is slightly quieter than the D string, but it is a small difference. It is easier to produce a quiet tone on the Yamaha so it has a bigger dynamic range than my acoustic. The Yamaha is responsive and doesn’t have any trouble with tremolo or spiccato. My acoustic is a bit better at producing an accent where the bow hair grips the string before starting the note, but that may be due to the strings.

The Yamaha doesn’t have a built in pre-amp. It does have a volume control that you can activate by pushing a button on the back and then twisting a dial. I never use this control. 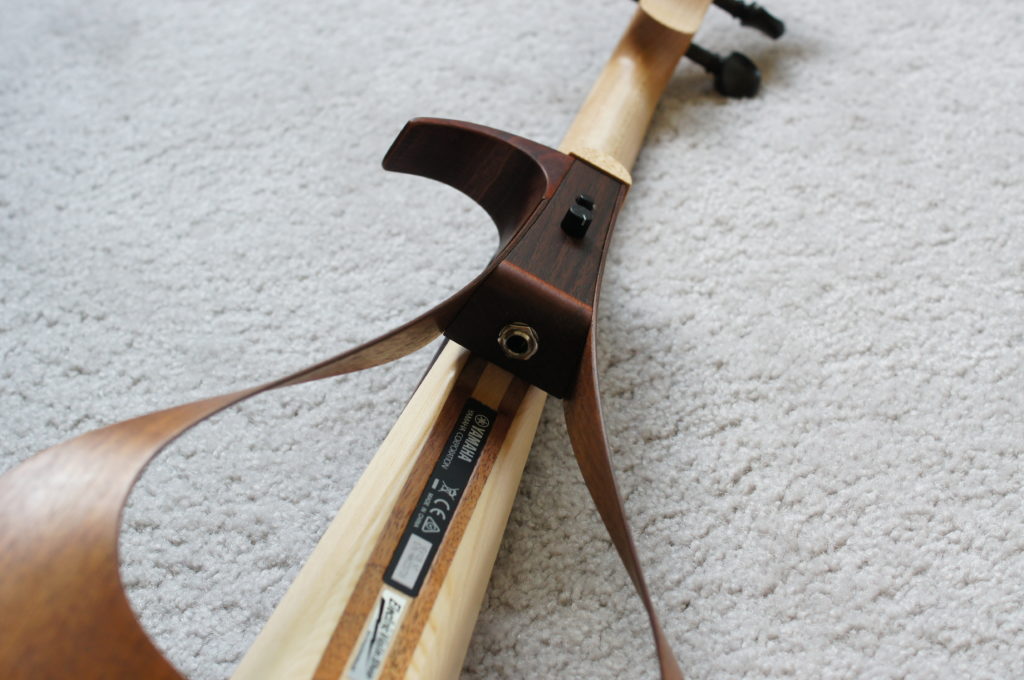 The output is a standard 1/4″ unbalanced headphone jack. I haven’t been able to find the output impedance, but the manual recommends plugging it into an input with at least a 1 M Ω input impedance.

The pickup is pizo-electric and built into the bridge. 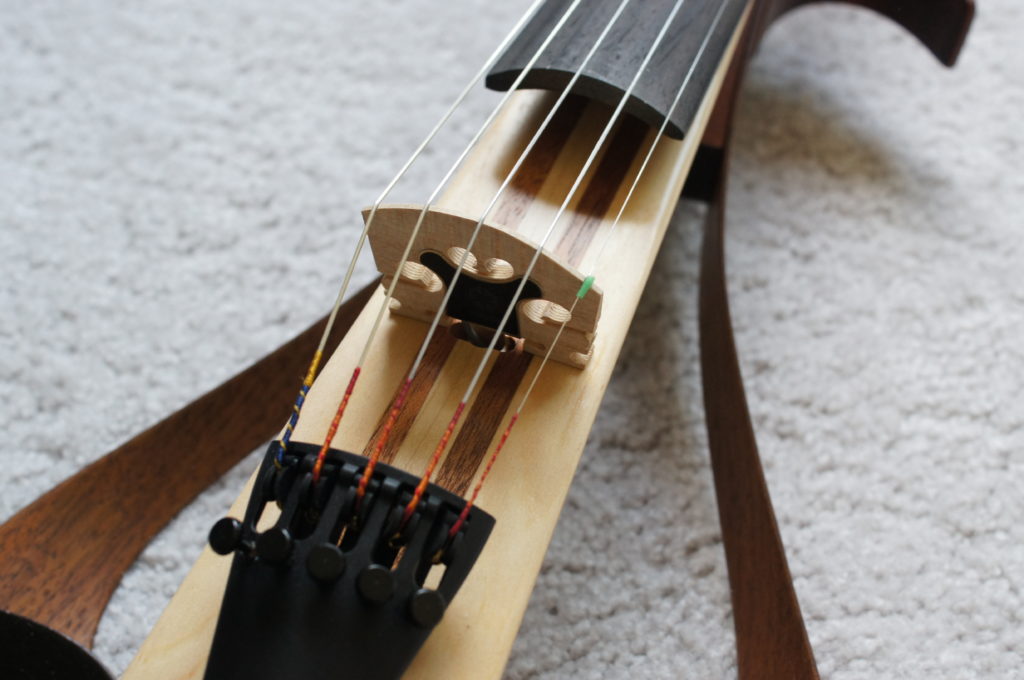 I don’t own a pre-amp or guitar amp, but I do have a receiver and home stereo, so I bought a DigiTech RP360 pre-amp and effects processor to connect the violin to my stereo. The RP360 has a 1 M Ω instrument input and a 500 Ω unbalanced output. It can be used as a pure pre-amp, but it can also apply reverb, modulation, and equalizer effects. I also has a 40 second loop, a USB output for recording on a computer, a metronome and tuner. 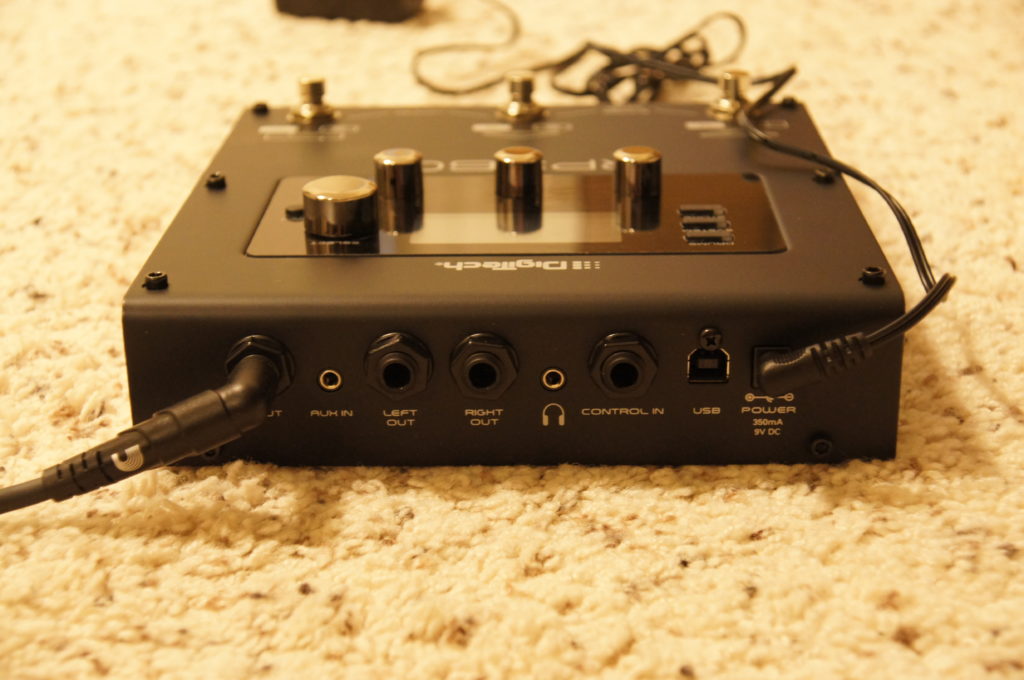 The violin is plugged into the input jack on the left and the power cable is on the right. The RP360 provides two analog outputs labeled “left” and “right” I have those plugged into my stereo with a 1/4″ to RCA cable. The other connections on the box are to plug in auxiliary input (for playing along with a accompaniment track), headphone output and USB digital output. The “Control In” is for a pedal.

The RP360 comes with 100 effects settings presets. Most of these are for electric guitars and I didn’t find any of them to be to useful for making the Yamaha sound like an acoustic violin. They are fun to play with though, and you can create lots of interesting sounds.

These settings sound good on my home stereo, but when I connect to my computer, it sounds a bit over-processed. So for recording, I use these settings:
Equalizer: Low -12db, 70 Hz, Narrow, Mid 0db, High 0db.
Modulation: Pearl chorus level=40 speed=20 depth=50 wave=sin
Reverb: Lexicon studio level=25, pre-delay=0, decay=60 lieveliness=75

When I connected the RP360 to my computer running Windows 10, I had some issues getting the sound to work. When the device connects, Windows 10 recognizes it and there is no need for a driver. It shows up as both an audio input and output device. It comes with software called “Nexus” for managing your effects settings and installing firmware patches.

To get it to record I had to set it as both the default input and output device. Since it is the default output, if you want to play accompaniment, you need to hook up speakers or headphones to the RP360. Similarly, if you want to hear what you are playing it is best to plug in headphones or your stereo on the RP360 itself. I found that sending the output of the RP360 to my computer sound card had too much delay.

Overall I am very happy with the violin and the RP360. It is nice to be able to practice without using a mute and the sound quality is good. I’m also excited to learn how to play viola music and take advantage of the fifth string. Having the fifth string hasn’t been too hard to get used to and I can now go back and forth between my acoustic four string and electric five string without much difficulty.

I also really like being able to record the violin directly to my comptuer. I’ve been using my camera to record myself, but the sound quality isn’t great and I can’t have a metronome or accompaniment playing.

I’ve also enjoyed the loop recording capability of the RP360. I’ve been using it to record one violin part and then practice the second part and the 40 second buffer is too short.

The sound quality is not quite as good as my acoustic violin. The acoustic is a fuller and more powerful sound and I’d chose it if I were playing for people. The acoustic was $1800.

I also have a Cecilio electric violin ($120) and the Yamaha is much easier to play and has dramatically better sound.

I’ll probably never play in a band, but the Yamaha would be perfect for playing with other amplified instruments.

Here is a video that I made so that you can hear the differences yourself:

It is coming up on a year with my YEV-105 and I am still happy with it and using it as my primary practice violin. I haven’t had any problems with the violin. The pegs are still good and I haven’t even broken a string.

I’ve taken a trip to Mexico with it and am fairly happy with it as a travel violin. There is a little more equipment to bring along than for an acoustic violin.

If you are looking at buying this violin just for practicing, you could consider using something like the iRig instead of the RP360. It is really just a small amp that converts the output from the violin into input for headphones or computer/phone. This doesn’t provide a good way to play for an audience, but it is smaller and cheaper than the RP360. ($40 at Amazon)