END_OF_DOCUMENT_TOKEN_TO_BE_REPLACED

Hansa Teutonica is nearing completion and I wanted to capture some of the lessons that we learned during development. Overall, the game has turned out to be a much larger project that we originally anticipated. We are very happy with the design that we ended up with and we think that future games can use the same design. The game is currently playable except for placing an office to the side of an exiting city. There are also some user interface improvements to make and quite a bit of testing yet to do. But the majority of the code is done. 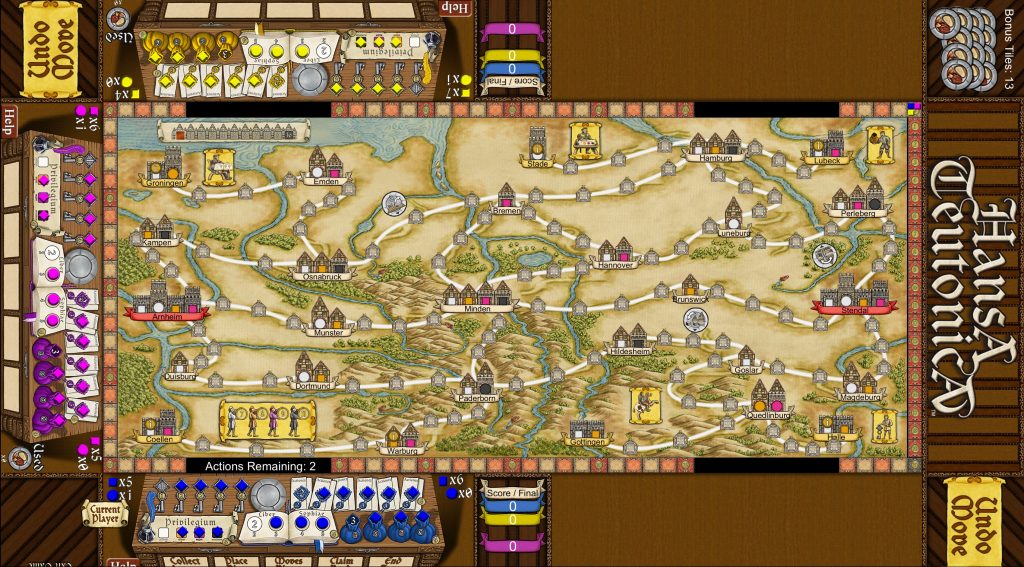 END_OF_DOCUMENT_TOKEN_TO_BE_REPLACED

There has been a lot of progress made on the Hansa Teutonica conversion. The model is done, though the testing has been pretty light. Many of the graphics have been created and the GUI code for interacting with the player is started.

Here is the player board. This is for the active player. Inactive players wont have the buttons at the bottom. It still needs to show the cubes covering the non-upgraded ability levels.

Here is a code snippet of two functions that I wrote to try out the new C++ 11 features. They are both doing the same basic thing: Given the value of a member variable, find the object in a vector that matches that value. First, here is what it would have looked like before:

Here is the same basic idea using the new “for each” syntax. Notice that it is much cleaner. And I don’t have to create the iterator variable at all. There are certainly cases where you are going to need the iterator, but this isn’t one of them.

Finally, here is the version using lambda functions. I’d had high hopes for this approach and was a bit disappointed with the results. There are certainly cases for using lambda functions, but this isn’t really one of them. Though, if this were in a performance critical part of the code, the lambda function might be a bit faster. Also notice the use of the “auto” keyword to declare the iterator. This is another new feature, and is a great benefit. Using either of the two new approaches, I don’t have to know what kind of collection I have to use the collection.

Now that we are getting a multitouch table, it is time to write some games for it.

William has already written GemHoarder and we have decided that the next game will be Hansa Teutonica.  It is a relatively new game that we really enjoy. The game doesn’t have a lot of different cards or exceptions that make a conversion difficult.

We are going to write the game with the Torque 2D game engine. William has already incorporated TUIO events into the engine. It is a C++ engine and I will be creating the back-end game model. The game is turn based, and on each player’s turn they can perform 2-5 actions. We know that we will need to be able to undo actions because the player may click in the wrong place, or just change their mind. The later happens regularly in the physical version. So I am going to create a model of the players and the board and then a move system that modifies the model. Finally, there will be some kind of game-runner that interfaces with the GUI to find out what the player wants to do, constructs the move, has the move apply itself, and then saves the move so that it can be undone.

I am also looking forward to trying out some of the new features in C++ 11. My previous C++ application was written with Visual Studio 2008 because the CLI/.NET intellisense is broken in VS 2010. Since I wont be using any of the managed code for this project, I can use VS 10 which supports most of C++ 11. The features that I am planning to try out are the “for each” statement and the Lambda functions.