We hosted a game day this Saturday and got to show the multi-touch table to our gaming friends. There were about 15 of us and the table was a big hit. We didn’t have Hansa Teutonica complete, but we did have Wits and Wagers, Gem Hoarder, Yahtzee, Texas Holdem, Concentration Sweep, Solitaire Dice, and two action game prototypes. People seemed to enjoy the speed that games of Wits and Wagers and Gem Hoarder could be played compared to the physical versions. And we were surprised by how addictive the action game prototypes were. Even though they lacked a lot of polish and features, they got a lot of play.

We took some video of the action and will get that edited and posted on youtube soon. We wanted to have a video to show off when we pitch game designers on the idea of converting and selling their games. I am planning to contact the designers of “Hansa Teutonica”, “Brass”,  “7 Wonders”, and “The Resistance” this week to see if we can get permission to make their games for the touch table. 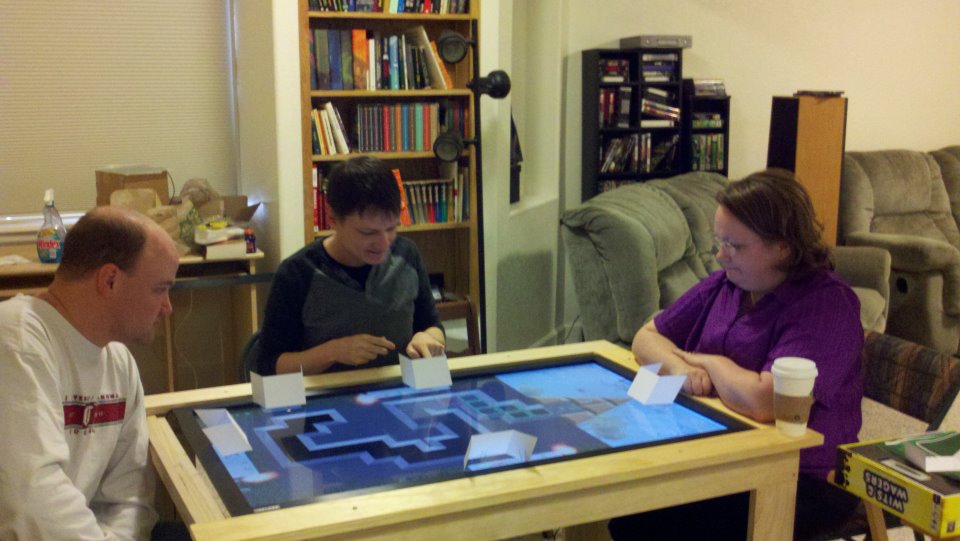 On Thursday and Friday of last week I started working on a simple action game to test the responsiveness of the table in a fast paced game. I created a simple game where players use virtual arrow keys to steer a spaceship around a board and fire at the other ships. My first discovery was that it was too hard to release a virtual arrow key. On a physical keyboard it is obvious when you have released a key, but on the virtual keyboard, it seems like the key should be released as soon as your finger comes up off the screen. But with the IR detector above the TV, you have to raise your finger about 1/4″ before the touch is lost. So it would feel like you had stopped pressing a direction, but the game was still registering the touch.

So I replaced the virtual arrow keys with a virtual control wheel where you touch and leave your finger down to steer. The ship turns in the direction that your finger is placed and it’s speed is based on how far your finger is toward the edge. It works significantly better than the keys did, but is still not perfect.

By Saturday, I had two types of weapons, one for taking out shields and the other for damaging hull. When destroyed, the ships would quickly re-spawn.

When we tested the game with the full eight players, we saw some problems with the center player’s touches not being detected. The touch sensor requires visibility to three sides to register, so if there are already touches on both sides, a new touch will not register. To solve this, I will probably need to put the control areas of the center player at a slightly different position than the areas of the left and right players.

Since the game was popular, I will probably add a few more features and polish the graphics. I’ll probably add some obstacles, different ship types/attributes, ship collisions, power-ups and the ability for players to drop out and join the in middle.